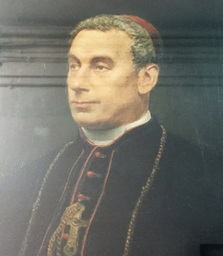 The parish covers the Borough, which is just south of the City of London and next to London Bridge Station. The parish is a vibrant mix of businesses, shops and local residents. The newly developed London Bridge and the Shard (the tallest building in Europe) is a good landmark to find the Church.

The architect of the Church was Frederick Arthur Walters (1849–1931).  Walters was a pupil of George Goldie and, like Goldie, developed an extensive practice designing Catholic Churches.  Walters’ best known works are the Abbeys at Buckfast and Ealing but he was the architect of over fifty Churches in a variety of styles.  Within the Archdiocese of Southwark he was responsible for many Churches from the intimate St Wilfrid, Kennington (1914-15) through to the magnificent Sacred Heart, Wimbledon (1884-87).  He also designed the Seminary at Wonersh (1891).

The church building was completed in 1892 and has undergone a number of restorations and developments in its history. In 2019 a major restoration was completed with the Church being Consecrated on 1st July , the Feast of the Most Precious Blood, by Archbishop Peter Smith.